How Entrepreneurs and Marketers are Taking Advantage of Pokemon Go

I’ve been a huge fan of the Pokemon series ever since the first games Red and Blue were released back in 1996 and I’ve played most of the entries in the series.

So when Pokemon Go was released I had to give it a try and I’m having a lot of fun with the game.

Pokemon Go is an augmented reality smart phone app. It uses your phone’s GPS to track down creatures called Pokemon in the real world that you can see on your phone through the camera. ?You can then try to catch these Pokemon, raise them to make them stronger and battle other Pokemon.

The most interesting thing about Pokemon Go though is how everyone’s reacting to it. I’m especially interested in how businesses and marketers are taking advantage of the phenomenon and there are tons of enterprising people and businesses trying to cash in.

Several people have built useful websites and tools for the game. One of the most useful tools I’ve found is?called Pokevision. 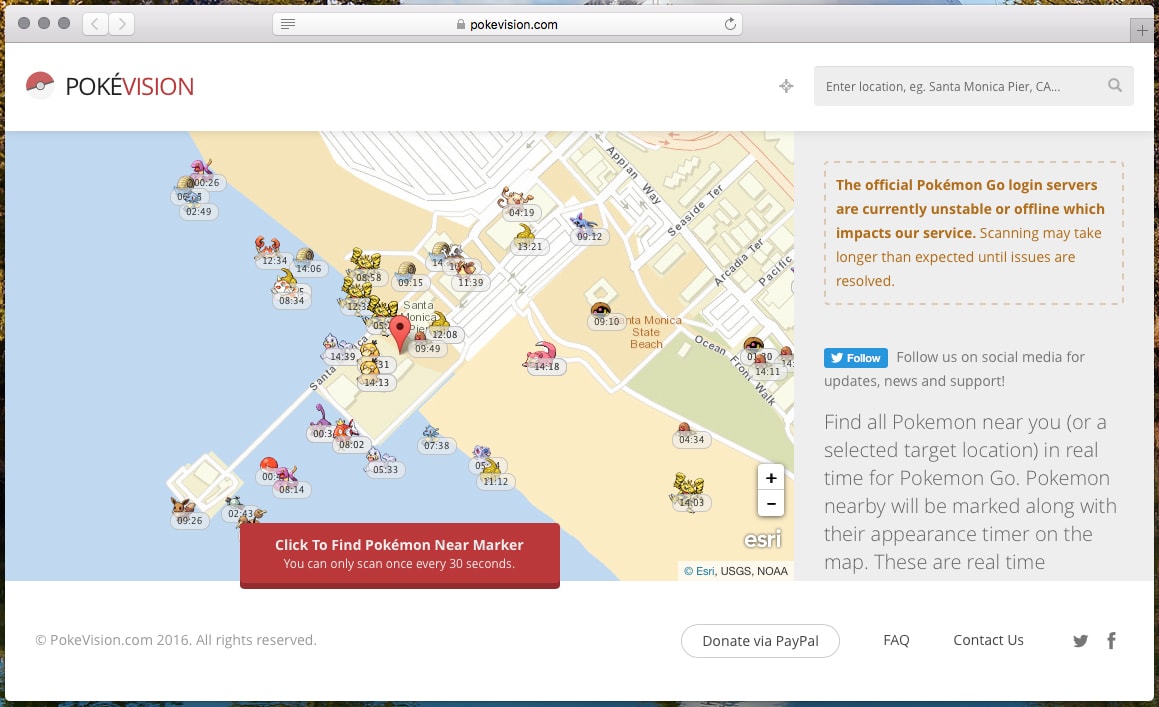 Pokevision uses a map tied into the game’s API to display Pokemon near any location you select. You can enter your address, click to scan and any near by Pokemon will appear on the map along with a timer showing how long until they disappear.

Another useful tool someone created is this server status tool which will tell you if the servers are up and running.

Both these sites show Google Adsense ads and collect donations. Based on the level of popularity on sites like Reddit that both these tools enjoy they have to be getting a pretty large amount of traffic.

Both these sites are excellent examples of people having an idea and getting the first mover advantage by hustling and taking advantage of the Pokemon Go craze early on.

There are also Pokemon Go themed dating websites popping up. ?These sites help you set up dates with other Pokemon Go players so you can go out and catch Pokemon together. 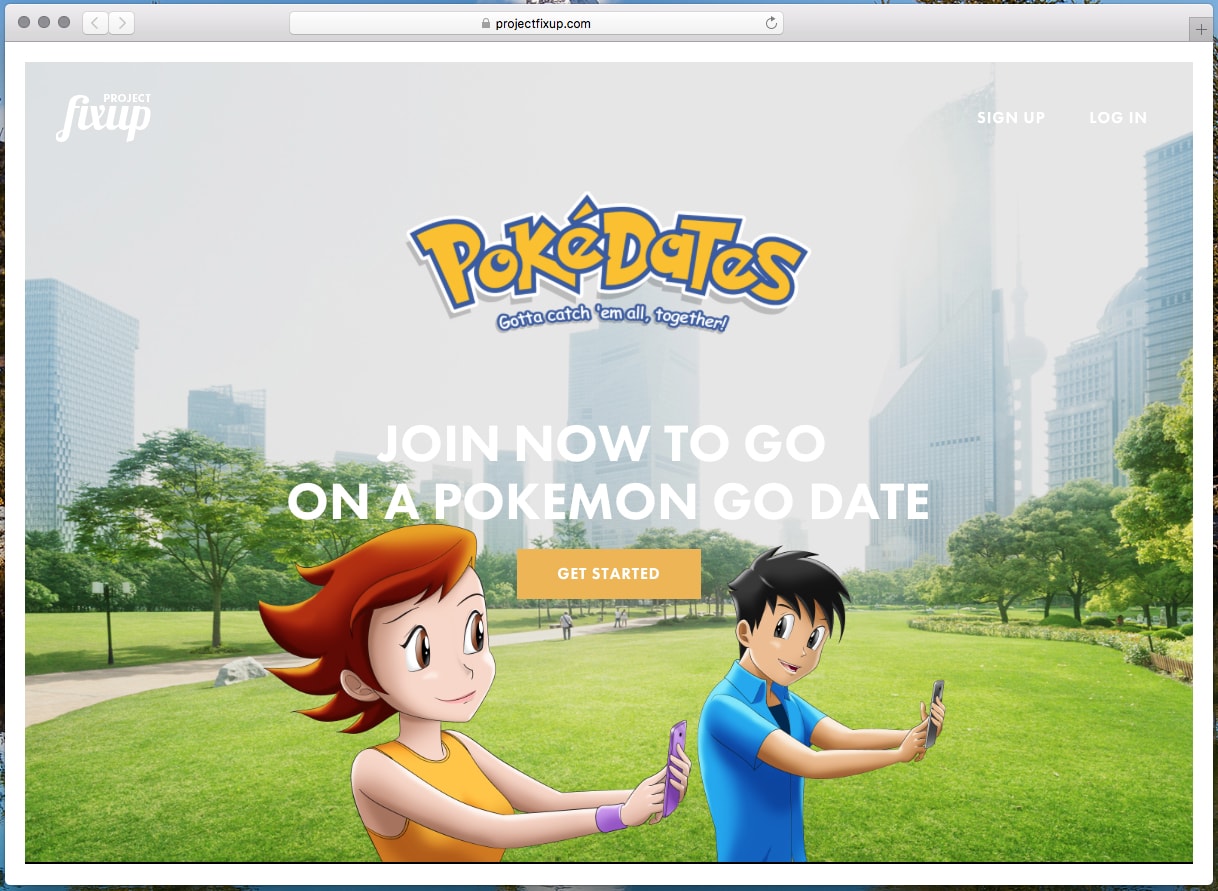 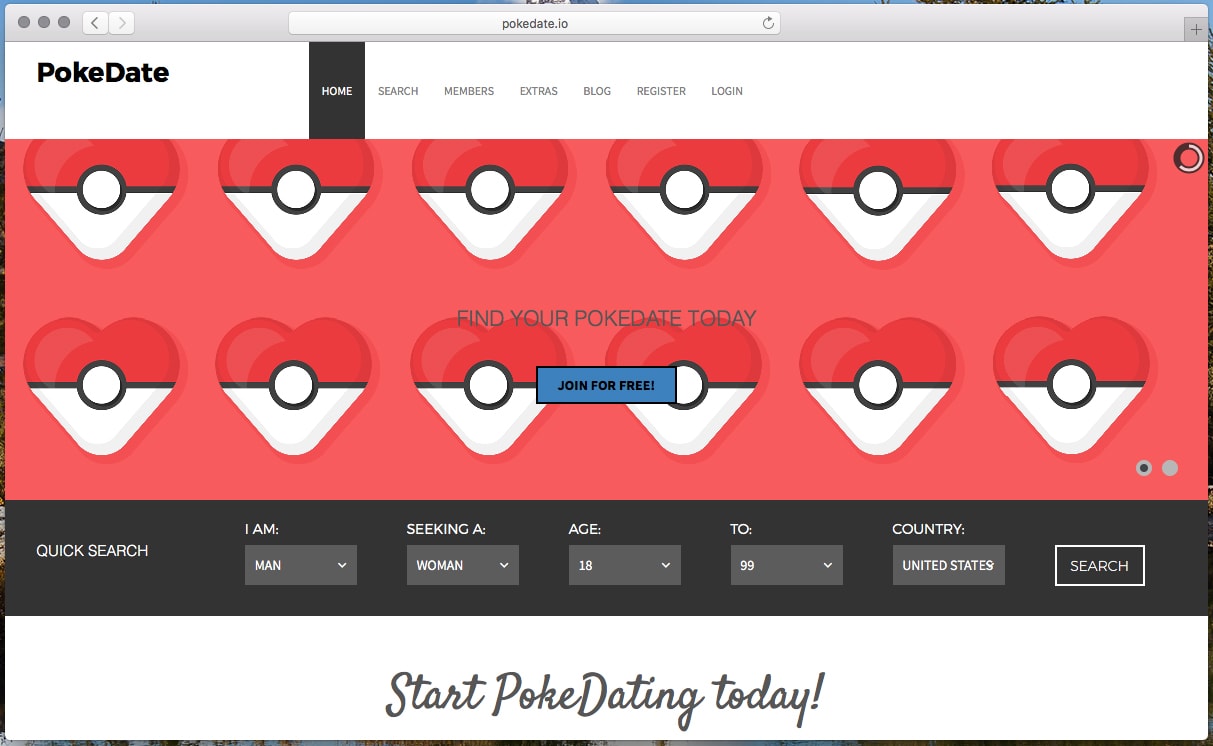 Lure Stops is a site that connects local businesses with Pokemon Go players. Businesses sign up with Lure Stops and post exclusive deals which are then curated and notifications are sent out to trainers based on their location. 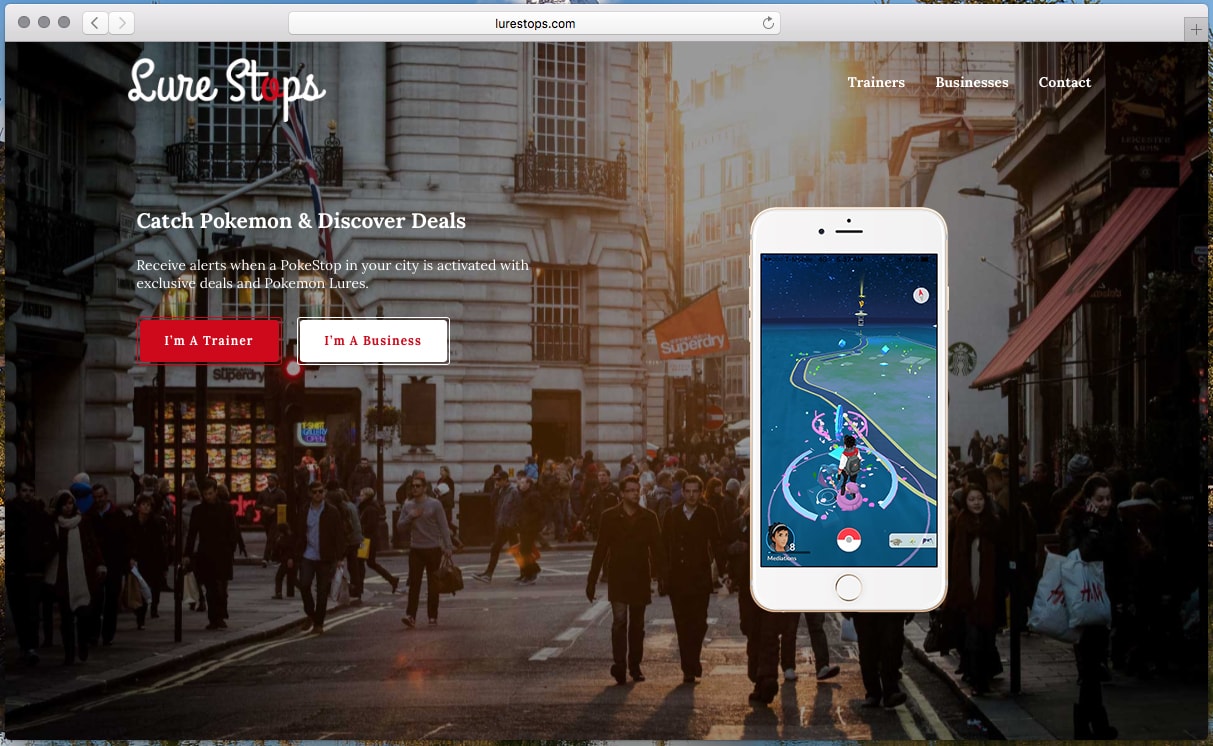 Another group of people are trying to take advantage of the craze locally by creating ads on classifieds sites like Craigslist or Kijiji for various Pokemon Go related services.

For example, people are charging an hourly rate to act as chauffeurs driving customers around the city to catch Pokemon.

In Pokemon Go you can collect eggs which will eventually hatch into Pokemon after you walk a certain distance. Some eggs hatch after 2km, some after 5km and the rarest Pokemon hatch from eggs that take 10km of walking.

Because of the way the app works it’s incredibly difficult to trick it into hatching your eggs. There’s a maximum speed you can walk so you can’t just drive the distance in your car for example.

So of course there are people who are offering egg hatching services where they’ll take your phone and then walk the required distance often charging per km.

And you also have people offering general services like leveling up your Pokemon and character.

There are also people selling their accounts after they’ve levelled up decently high and caught a lot of Pokemon.

On eBay there are accounts selling for hundreds of dollars. 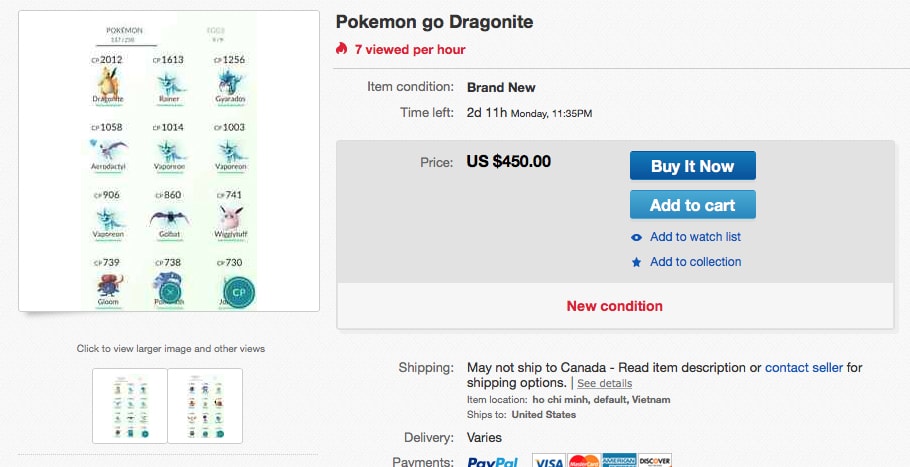 The Telegraph has reported that people have sold accounts for thousands of dollars. One account was apparently sold for??7,300, that’s almost $10,000 USD! Another user apparently sold his account for about $1,800 USD.

Locally on Kijiji accounts seem to be selling for a lot less though and based on how much time you have to put into the game to level up that much it might not be a great investment.

On Kijiji user had a pretty interesting idea though, for $30 they’ll level you up to around 8-10 and catch about 60 Pokemon so you have a head start on the game.

If this user is in a good location and has a good account themselves they could probably easily level up an account this far in a short amount of time and get a good hourly amount.

Selling your account is technically against the game’s terms of service though so you might not want to concentrate your business idea around that just to be safe.

Restaurants, Shops and Other Local Businesses

Many local businesses such as restaurants or small brick and mortar stores have been taking advantage of Pokemon Go to entice customers.

One of the most fun things about this whole Pokemon Go thing is seeing the creative signs and advertising business are using to attract people inside.

Tons of photos of great signs and ads have been posted to social media by people all around the world. These are a few of my favourites.

Please note that I found most of these images on social media sites and have no idea who to credit for the source. If one of these photos is yours please contact me to let me know and I’ll give you credit.

This restaurant is offering players a free coffee if they activate a lure on the Pokestop conveniently located by the restaurant. 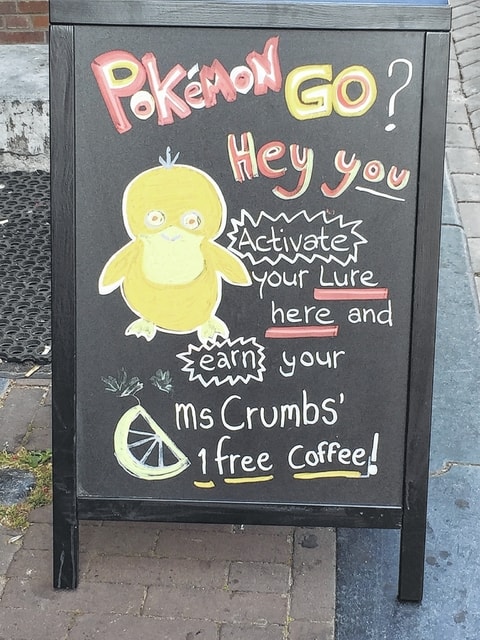 Pokestops are located all over the place, usually on monuments, murals, parks and things like that. The denser the city the more Pokestops there usually are.

When you get close enough to a Pokestop you can collect free items every five minutes or so. You can also drop a Lure Module which attracts a lot of wild Pokemon to the location.

Other players can see that the Pokestop has a lure attached and they tend to gather around the stop for the 30 minutes that the lure lasts to catch the Pokemon that show up.

Of course businesses like this are taking advantage of these Pokestops to attract more people to their location.

This pizza restaurant is offering free rewards to players based on their level. 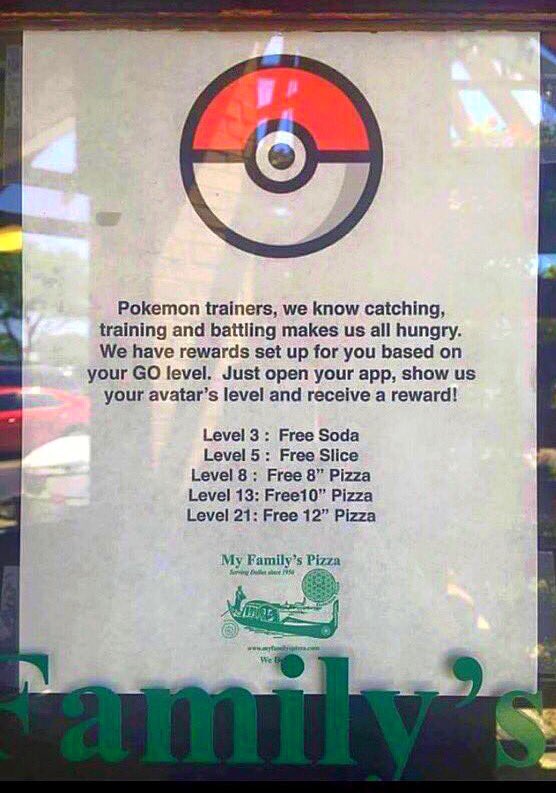 This clothing store has a great sign to attract people inside. 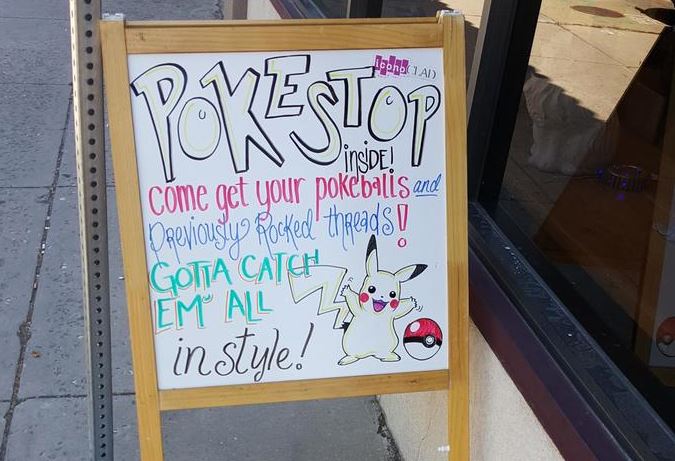 This restaurant?is also trying to get some social media attention while offering a discount to customers. 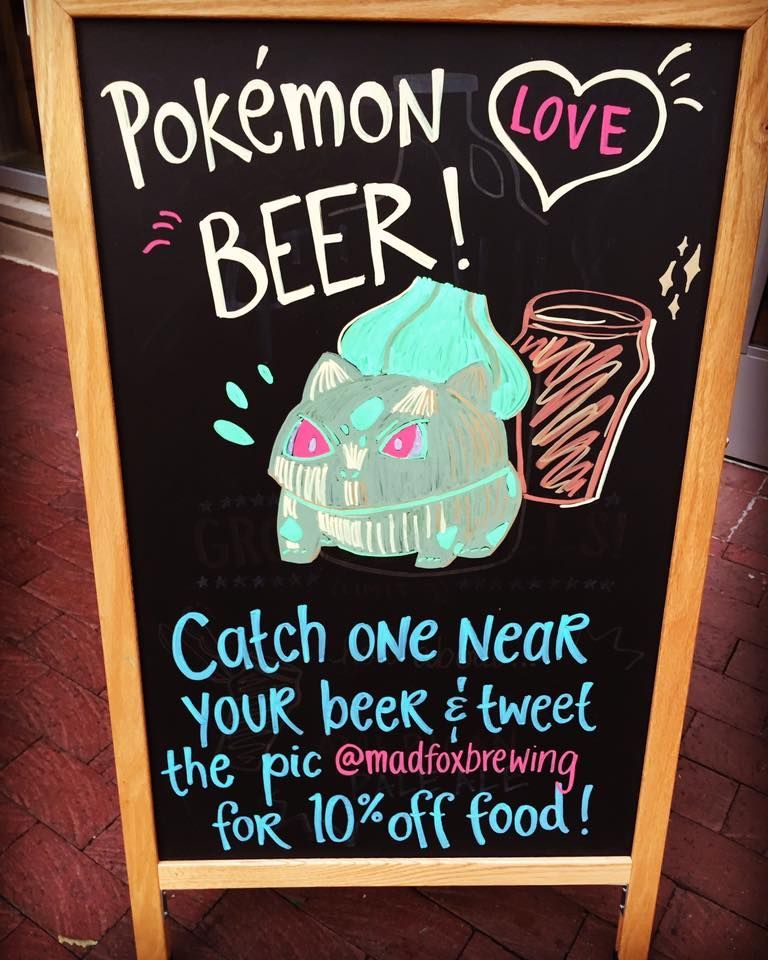 This place is fortunate enough to be located on top of two Pokestops. The business itself will be dropping lures and they even have Pokemon themed drink specials. 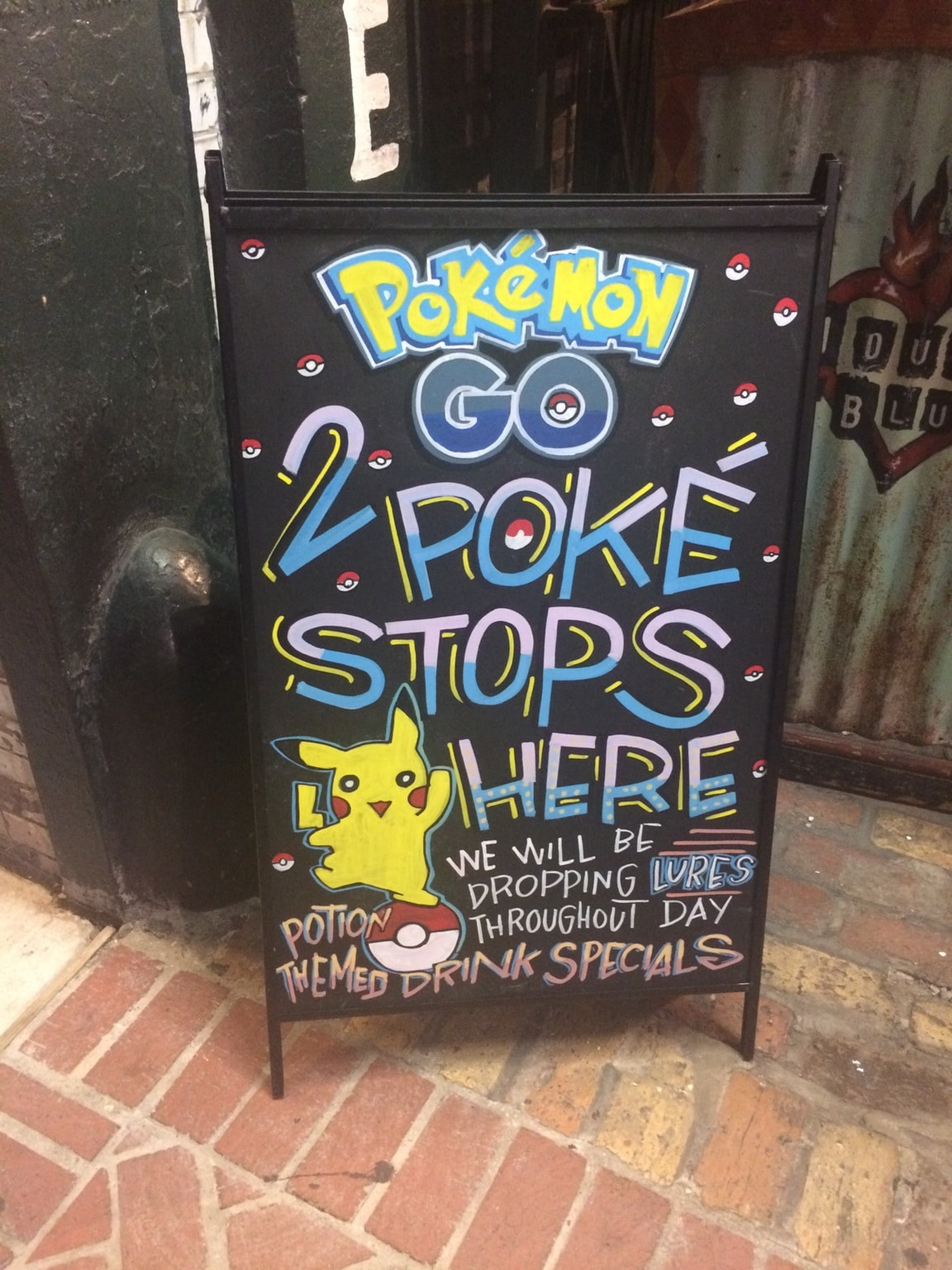 This Starbucks is also dropping lures to encourage people to visit their patio. 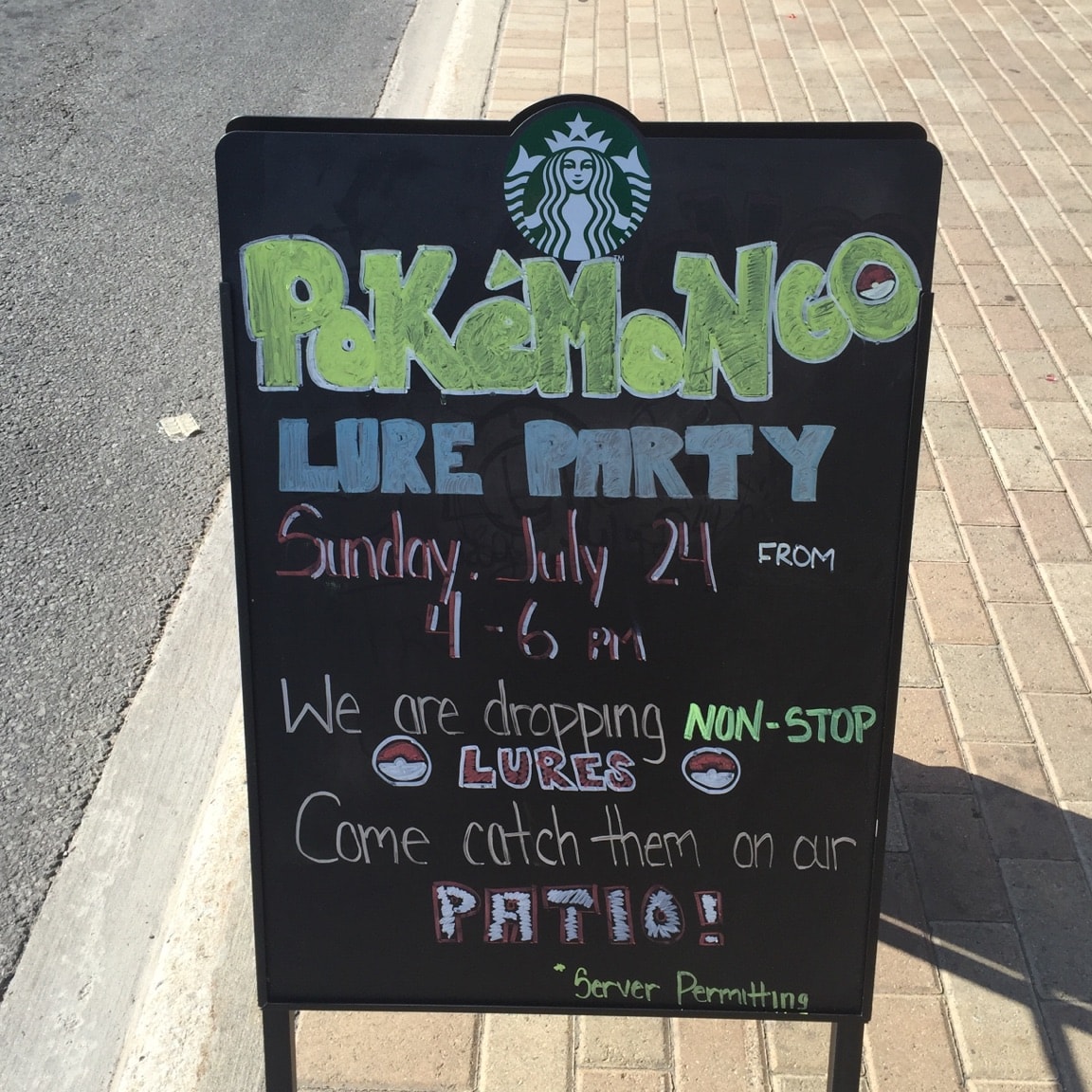 There are three teams in Pokemon Go: Instinct (yellow), Mystic (blue) and Valor (red). Players can join whichever team they want and battle with players on opposing teams.

Many people feel really strongly about their chosen team and a lot of businesses have some great team related signs. 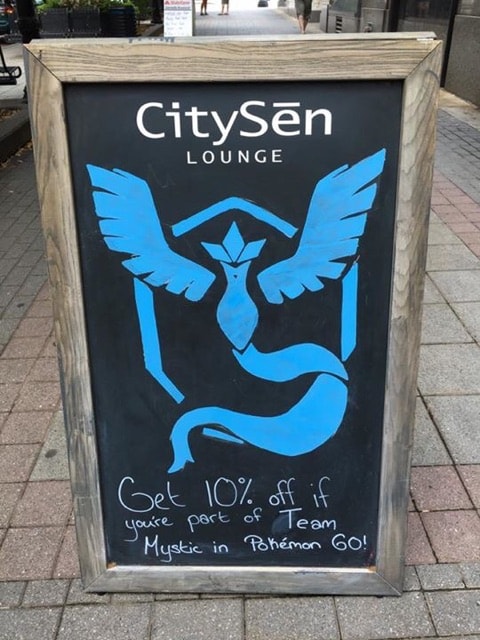 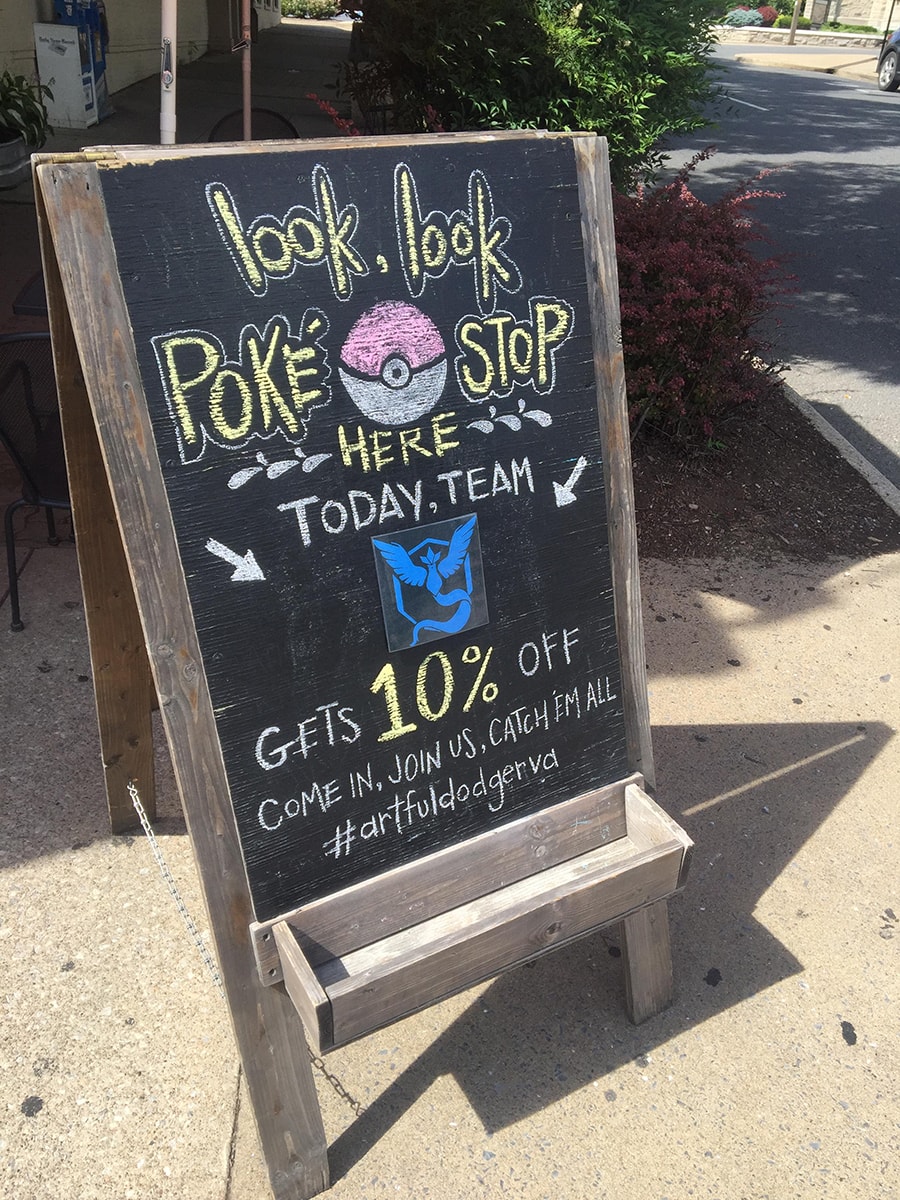 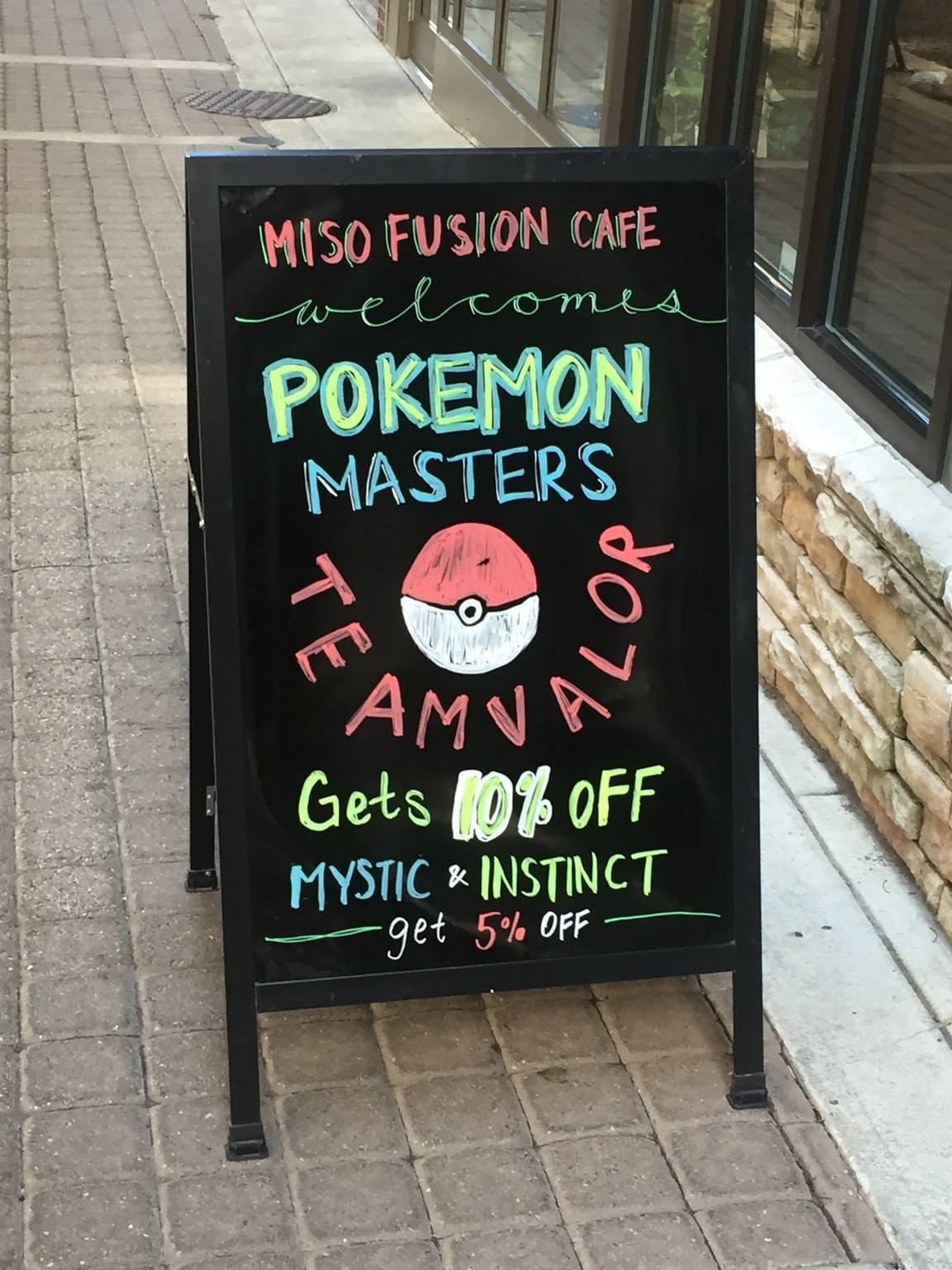 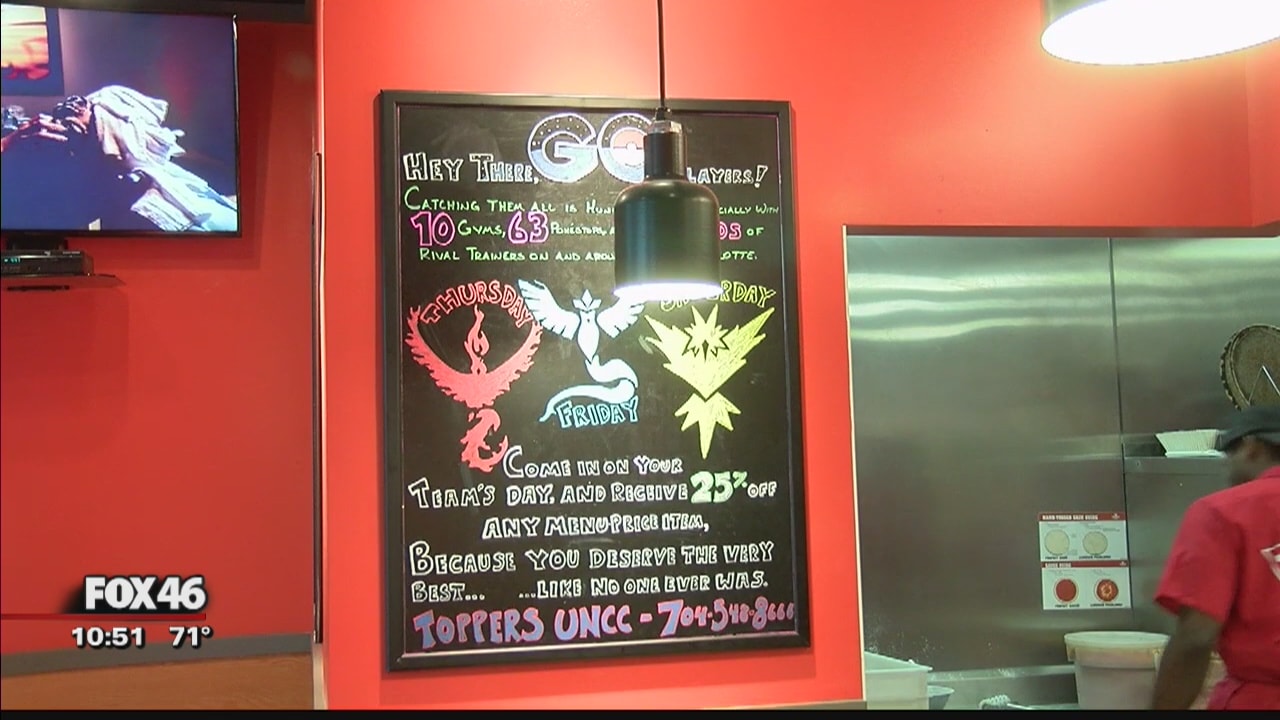 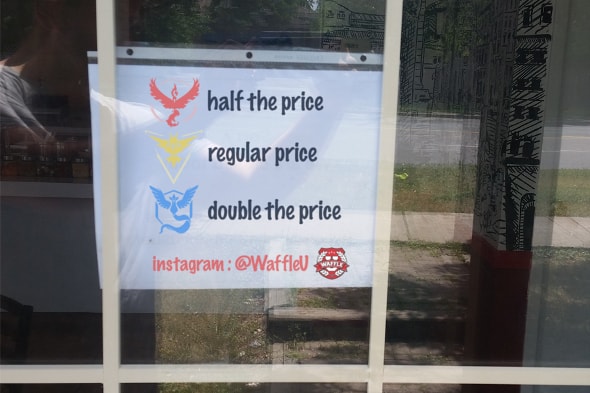 Non-profits are also taking advantage of Pokemon Go such as this STD clinic in L.A. 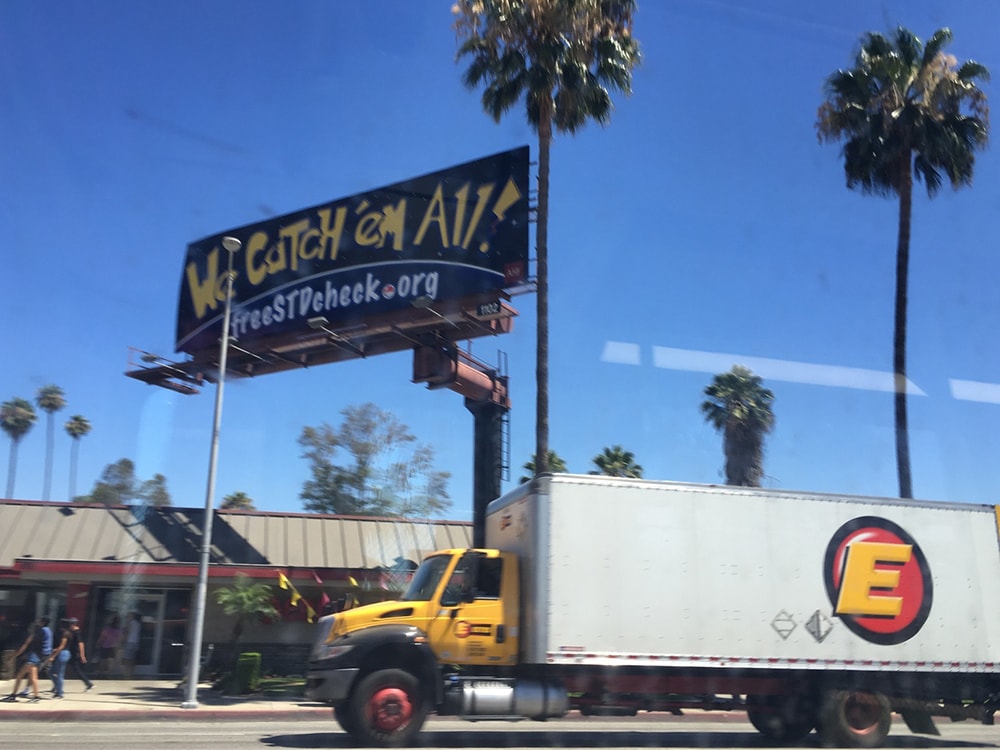 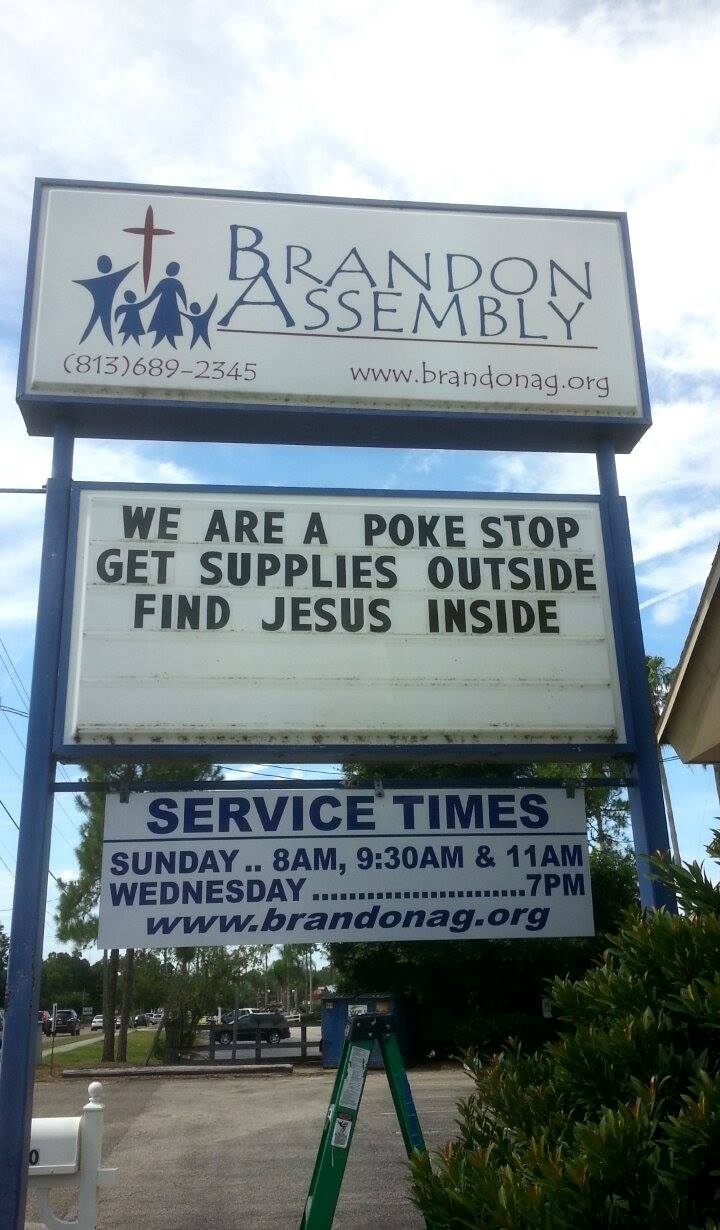 The United States Navy is even apparently trying to use Pokemon Go as a recruitment tool. 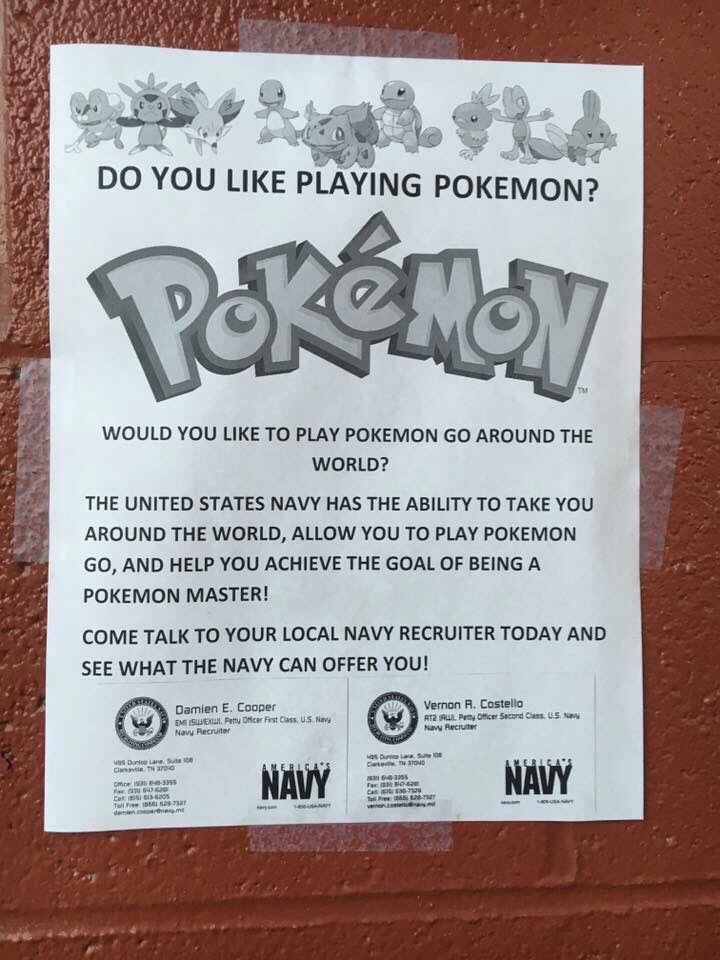 Yelp even has an option now to search for restaurants that are near a Pokestop! 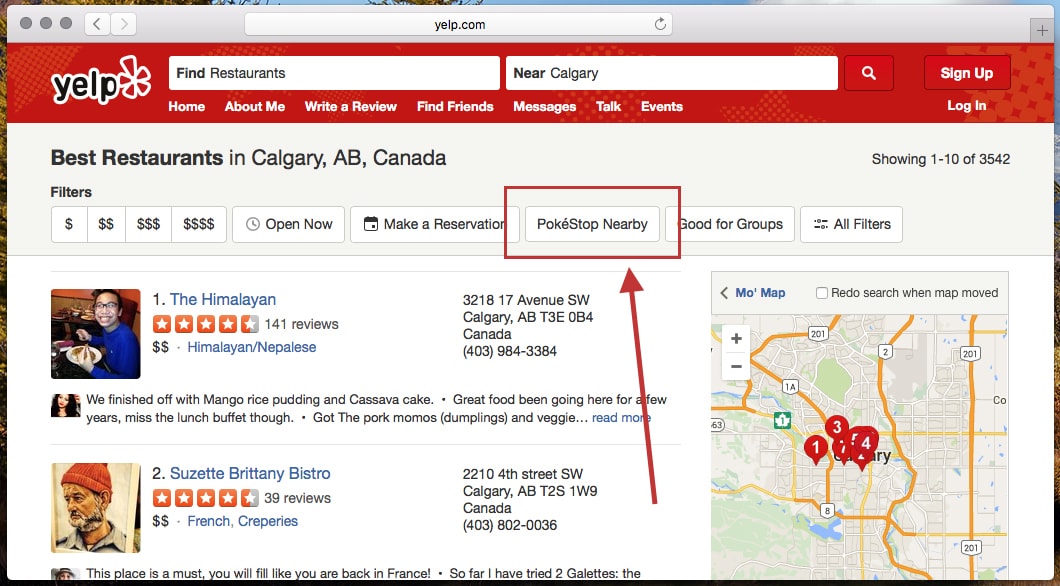 And people are asking realtors for houses, condos or apartments that are near Pokestops too.

There are of course businesses making various accessories for Pokemon Go such as this 3D printed case that clips onto your phone and helps you throw your Pokeballs more accurately. 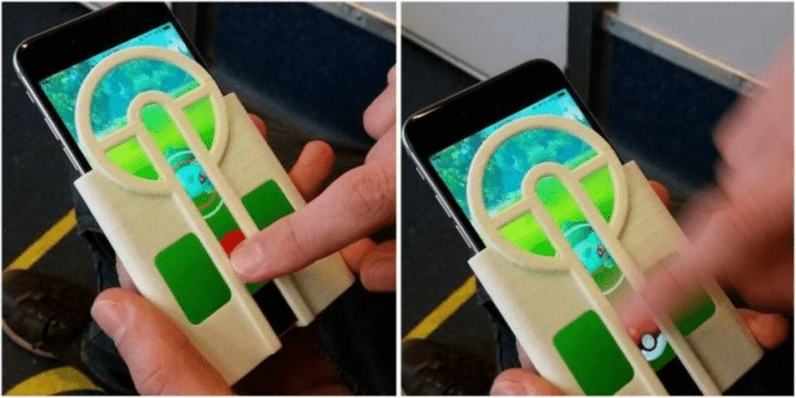 Not to mention all the other various phone accessories, clothing and other Pokemon Go related items you can buy.

If you manage social media accounts for your business then Pokemon Go is a fantastic tool you can use to engage with your followers while keeping what you post unique to your business. Plus you get to have fun as well.

Here’s a collection of excellent examples of companies using Pokemon Go on their social media.

A Pokemon has been spotted in Cat Depot’s store! We are the gym. Come see if you find one! =D #PokemonGO pic.twitter.com/Qm3qBSoiBC

Find your #Pokemon in our stores! These are in our #Chillicothe store right now! #PokemonGO #BuckeyeGold #ComeSeeUs pic.twitter.com/WOUs4zoGUa

When a wild Rattata tries to steal your morning coffee ?? #GotToCatchThemAll #PokemonGo pic.twitter.com/uBsMpImi2k

In case you needed another reason to stop by for lunch, RTM is swarming with Pokemon! #loveRTM #EatMorePork #PokemonGo #PokemonGoPhilly

we may or may not have had some #PokemonGO sightings in store… #PokemonGoProblems @ChurchillSquare ? pic.twitter.com/5UtnN4pDWk

#Pidgey has been hanging around the store so we decided to add him to the team! #PokemonGo #TheUPSStore #TomsRiver pic.twitter.com/BoWlmoJylN

We’re open until 9pm tonight so come by and fuel up with a coffee while you’re on the hunt. #PokemonGO #Oshawa ?? pic.twitter.com/boaQFF7d4P

Look what @ogbrewer & @TonaVoorheis caught. If U catch 1 in the O’Bar & post a pic we’ll buy you a beer! #PokemonGO pic.twitter.com/Cqw8bGfBY3

Look who was caught at our Hill Avenue Branch! You can do all sorts of things at the library this weekend including catching Pokemon and staying out of the heat and smoke outside. #heatwave #pokemongo

We had #Charmander pay a visit to our Fab4 Store today. #PokemonGO #AlbertDockPokemon #PokemonGOUK pic.twitter.com/1yfSYhDbOg

We had a peculiar guest in today, he was was very pleased with the coffee #PokemonGO #coffee pic.twitter.com/z13DrJhNsk

Looks like you can catch more than just a bargain in our store today! #PokemonGO pic.twitter.com/6NQ6RA8O37

Guys! There’s a Poliwag outside our Oxford Store. Catch some sun and some #pokemon while you’re at it #PokemonGO pic.twitter.com/rxGj37Jy6Y

They’re even behind the bar! Maybe they’re mixing your drinks? #PokemonGO #halifax pic.twitter.com/1p9syKs6BN

This is by far my favourite Pokemon Go related business. This little girl realized that her house was right by a Pokestop so she decided to open a?store selling drinks and snacks to the Pokemon Go players who came by.

This photo?has been viewed over 5.5 million times and apparently the girl is trying to save up money to buy a phone so she too can play Pokemon Go.

I absolutely love seeing all the different entrepreneurial ideas people are coming up with using Pokemon Go. If you’ve seen or heard of any other great ideas let me know in the comments!

Your email address will not be published. Required fields are marked *

Online reviews are a huge influence on whether a client will do business with you. If you don?t monitor and take care of your reviews you run the ris...